The following paper was presented @ Noise_Con ’94 and provides a background of the technology and its application to both fans and heat sinks. (TheRingcage noise reduction feature is incorporated in the heat sink design itself and is part of the original LAC patent. US Patent # 5,292,088) 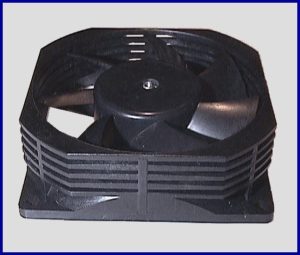 If you are interested in purchasing some Augmented Fans the Panasonic version can be found @ Digikey.com and are available as the “FBL Series” in sizes 60mm to 120mm .

A 92mm is available through NMB directly.

The standard test methodology consists of a three-part measurement process, (1) the individual fan flow, (2) its activity within the application, and (3) the associated noise levels. Fan flow, individually and applied,is measured with an AMCA 210-85 Airflow Test Chamber and the acoustic testing is performed using the methods of ISO 7779 [ref 2]. Both sound power andsound pressure levels at the seated operator position are measured which correlated to the ANSI chamber flow tests.

The performance of each fan is tested to yield static pressure versusflow curves that intersect the impedance operating point of the given computerbox (Figure 1). The results in Figure 2 and 3 show a significant reductionin fan tip speed for both of the LACAF configurations. Some variations in fan speeds are noted from flow curves to computer box application.

A summary of the acoustic test results is presented in Table 1. NoisePower Emission Level (NPEL) is the A-weighted sound power level in belsre 1 pW. The A-weighted sound pressure level in dBA re 20 *Pa is measured at the seated operator position. The comparisons are made for equal airflows using the standard fan of the original computer box; the fans areexternally powered in these tests. The augmented flow fans are about 0.7bels or 8 dBA quieter at the 13 CFM operating point and about 0.4 to 0.6bels or 6 to 7 dBA quieter at the 22 CFM operating point. These differencesare somewhat greater than could be expected based on the RPM power law[ref 3]; some of the additional reduction in noise level of the LAC fansmay be attributed to less broadband noise generated by the velocity profileof the expanding wake.

Figure 4 shows narrowband FFT data for the 22 CFM case. The standardfan has clearly defined tones at the blade passing frequency (BPF) andat the second harmonic of the BPF. The LAC fan has a reduced BPF tone anda much lower broadband noise level. The LAC In/Out fan is even less tonal but has broadband noise somewhat higher than the LAC fan over the 0 to1000 Hz frequency range shown. Figures 5 and 6 show one-third octave bandsound power data for the two operating points. At 13 CFM similar resultsare noted except that at frequencies above 630 Hz, the broadband noisefor the LAC In/Out fan is the lowest. Here again the broadband noise ofthe LAC fans is lower than that of the standard fan even after accountingfor the RPM differences. Similar broadband noise results occur at 22 CFM.

At the lower frequencies where the noise contains tones, box interactioneffects are observed. For example looking at the narrowband data at 22CFM, the standard fan radiates a stronger BPF tone toward the seated operatorposition than either of the other fans. However, the sound power data exhibitsa different relationship. The LAC fan has a higher BPF one-third octaveband sound power level than the standard fan. So it appears that the computerbox and fan interact, radiating noise with a different directivity patternin the 250 Hz band for the LAC fans than in the 315 Hz band for the standard fan.

The noise level reductions of the test results are from the aerodynamicand mechanical effects presented herein. The aerodynamic advantages ofthe LACAF include tip vortex alteration and control of airflow distribution through the plane of the blade. The mechanical advantage is reduced bearing noise due to lower operating speeds.

The LAC concept is the union of an AMD (fan) and a stationary augmentor(ejector). With any axial flow fan, the ringcage action partially recoversthe losses incurred at the blade tips. As the vortex is being formed, itsdevelopment is affected by the proper positioning of the augmentor. The rings modify the blade tip vortices and use their energy to induce addedflow radially inward which can be as much as 50% of the total flow dependingon parametric optimization. Eliminating a major noise contributor (tipvortices) and using its energy for added efficiency as opposed to increasingsound power levels is a significant benefit of the LAC ringcage [ref 4]

The radial flow from the ring ejectors mixes the air in the blade planeto distribute the air velocities evenly in the spanwise direction. Thishas a number of noise control implications. First, in standard AMD’s, strongair vortices form from the 3/4 radial location to the tip, which impinge on the motor struts. The uniform flow field of the LACAF minimizes thiseffect. Second, an expanding wake, characteristic only of the LAC ringcage,allows more flexibility in box designs because heat source locations areless critical. Air activity in the wake covers much larger areas as canbe seen from the flow visualization comparison in Figure 7. Further, preliminarythermal testing indicates no large thermal gradients within the system,i.e., nearly constant box temperatures.

Reducing blade tip speeds lowers noise emission levels and the LACAFdoes this by increasing efficiency in two ways: (1) augmented flow, and(2) higher flow capability. First, the augmented flow as noted earlier, is as much as 50% of the total flow thus the fan does not need to operate as fast to maintain the system impedance flow requirements. Second, theair induced inward from the rings enters the blade plane on the low pressureside of the section profile. This energy is added to a normally adversepressure gradient preventing separation thus allowing operation at higherblade angles without stalling. The LACAF generates increased flow at slowerrotative speeds [ref 5].

With special attention given to mounting, The LAC gains additional noisecontrol through further fan speed reduction. Mounting the fan half-in andhalf-out of the system (I/O) creates a recirculation flow ring, which enhancesthe fan performance against high impedance. The adverse box pressure flowthat normally creeps back near the fan hub is thrown back into the system centrifugally to form an air seal. In some cases as much as a 40% tip speed reduction is measured maintaining the systems operating point, which indicates a potential 11 dB reduction strictly from the power law. In this case weobserve as much as a 25% reduction in fan speed and a corresponding 8 dBAreduction, 20% greater than predicted by the fan laws.